Roxborough Apartments comprises two lifetimes in one building: 27 classic units built in 1920 and 26 modern units built in 2019. This perfect mix provides residents all of the modern amenities and luxuries of a new construction building with the charm and character of Seattle’s revered historic buildings.

The classic architecture exudes historic charm that Seattleites seek in the Capitol Hill neighborhood. Its brick façade and traditional details have been meticulously maintained and stand out among new developments nearby that lack the thoughtful design of times past.

Modern units are perfectly integrated with the classic units, both in design and accessibility. This new construction offers the amenities and efficient design that today’s residents expect, reflecting the modern luxuries of our thriving city. Location: At the center of it all with an inviting neighborhood feel. Residents enjoy a short walk to stores, restaurants, and entertainment, a quick bike or bus ride into Downtown or SLU, and ease of access along 23rd to the Eastside by car. Any amenity a tenant could want is within reach. At the center of it all with an inviting, neighborhood feel 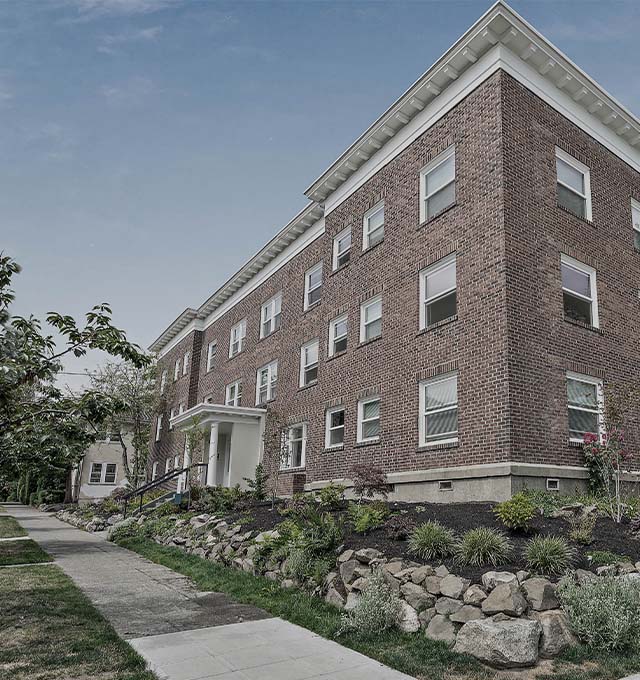 The Best of Old & New

Historic charm meets modern luxury transcends the physical walls of Roxborough Apartments – it is reflected all around on the streets of Capitol Hill.

Since 2010, more than 5,000 apartment units have been developed in Capitol Hill. While this inevitably brings a change to the landscape of the neighborhood, efforts to preserve historic buildings have maintained countless elements of the Hill’s past.

Consistently one of Seattle’s most popular neighborhoods, Capitol Hill’s reputation for bottomless-mimosa brunches, cream-cheese hot dog carts, and thrift shops remains a large draw for the city’s younger residents. The majority of this activity converges along Broadway and the Pike/Pine Corridor, streets lauded for being the vibrant anchors of the neighborhood.

Minutes away from the action, Roxborough residents enjoy a pocket of quiet residential streets – less noise and nightlife without sacrificing the bars, restaurants, and eclectic, independent businesses that appeal to the tastes and ideals of Seattleites.

Quick connections to employers in South Lake Union, Downtown, the University District, and the Eastside via SR 520 clinch Roxborough’s value as an ideal location to call home.

From the old school roots that put Capitol Hill on the map emerge new micro-markets and burgeoning retail amenities that orbit Roxborough Apartments – the ultimate convergence of livability and desirability for residents.

It’s as if the hub-and-spoke model of city planning has been implemented in reverse as Capitol Hill has grown and seen commercial zones both sprout and expand – and Roxborough Apartments is the lucky hub.

To the southwest, the Pike/pine Corridor has long been a source of vibrancy for the neighborhood, yet in the last decade new investment, development, and premier retailers turned these connector streets into a true anchor for the community.

Turning east, pockets of retail along Madison Street evolved into the Madison-Miller and Madison Valley micro-markets. Once just stops on the way to Madison Park Beach, bars, restaurants, and local retailers have turned these spokes into destinations of their own.

Just north of Roxborough is the newest spoke: 19th Avenue E. Tucked among single-family homes and small apartment buildings, the recent construction of new multifamily developments enabled the quiet expansion of a new foodie nook – and where the foodies go, all else will follow.

Last but not least, the 15th Avenue Retail Corridor holds the honorary title of “grown-up Capitol Hill.” While the physical landscape has been largely untouched by development over the last decade, 15th Ave perfectly balances the local character Seattleites have to live with and the basic amenities they can’t live without. Kidder Mathews is the exclusive Listing Brokerage for this Offering. Dylan Simon, Jerrid Anderson, and Matt Laird are exclusively representing the Seller in the sale of Roxborough Apartments.